A New Adult Contemporary Romance. Recommended for readers 18 and up. If you like your romance steamy and hilarious, this book is for you!

Available in eBook!
Buy it at Amazon.  But it at Barnes & Noble.

Virginity. Bliss Edwards is about to graduate from college and still has hers. Sick of being the only virgin among her friends, she decides the best way to deal with the problem is to lose it as quickly and simply as possible– a one-night stand. But her plan turns out to be anything but simple when she freaks out and leaves her potential sexual partner alone and naked in her bed with an excuse that no one with half-a-brain would ever believe. And as if if that weren’t embarrassing enough, when she arrives for her first class of her last college semester, she recognizes her new theatre professor. She’d left him naked in her bed about 8 hours earlier. 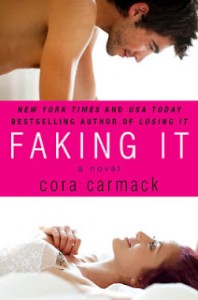 Available in eBook and Paperback!

Buy it at Amazon.  Buy it at Barnes & Noble.

Mackenzie “Max” Miller has a problem. Her parents have arrived in town for a surprise visit, and if they see her dyed hair, tattoos, and piercings, they just might disown her. Even worse, they’re expecting to meet a nice, wholesome boyfriend, not a guy named Mace who has a neck tattoo and plays in a band. All her lies are about to come crashing down around her, but then she meets Cade.

Cade moved to Philadelphia to act and to leave his problems behind in Texas. So far though, he’s kept the problems and had very little opportunity to take the stage. When Max approaches him in a coffee shop with a crazy request to pretend to be her boyfriend, he agrees to play the part. But when Cade plays the role a little too well, they’re forced to keep the ruse going. And the more they fake the relationship, the more real it begins to feel. 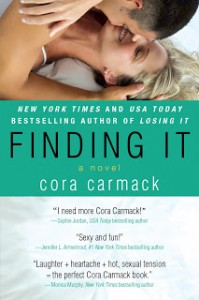 Available October 15th, 2013 in ebook and print!
Buy on Amazon.  Buy on Barnes and Noble.

Sometimes you have to lose yourself to find where you truly belong . . .

Most girls would kill to spend months traveling around Europe after college graduation with no responsibility, no parents, and no-limit credit cards. Kelsey Summers is no exception. She’s having the time of her life . . . or that’s what she keeps telling herself.
It’s a lonely business trying to find out who you are, especially when you’re afraid you won’t like what you discover. No amount of drinking or dancing can chase away Kelsey’s loneliness, but maybe Jackson Hunt can. After a few chance meetings, he convinces her to take a journey of adventure instead of alcohol. With each new city and experience, Kelsey’s mind becomes a little clearer and her heart a little less hers. Jackson helps her unravel her own dreams and desires. But the more she learns about herself, the more Kelsey realizes how little she knows about Jackson.

KEEPING HER (A Losing It Novella)

Available in ebook and print.

Buy on Amazon.   Buy on Barnes and Noble.

Garrick Taylor and Bliss Edwards managed to find their happily-ever-after despite a rather . . . ahem . . . complicated start. By comparison, meeting the parents should be an absolute breeze, right?

But from the moment the pair lands in London, new snags just keep cropping up: a disapproving mother-in-law-to-be, more than one (mostly) minor mishap, and the realization that perhaps they aren’t quite as ready for their future as they thought.
As it turns out, the only thing harder than finding love is keeping it.

SEEKING HER (A Finding It novella)