Okay… So I know it was like six hours ago when I made that post about “Everything” you need to know about Finding It.

Not on purpose. I just didn’t have the go ahead to spill this particular news. BUT NOW I DO!!

News that I have been teasing about for MONTHS. And now… I can finally share. Back in July and August, I was juggling A LOT. Final revisions on Finding It, the release of Keeping her, moving from Texas to NY, and my sister was about to pop out a fourth kid (Yes, fourth. She’s crazy brave like that).

And on top of that… I was doing this: 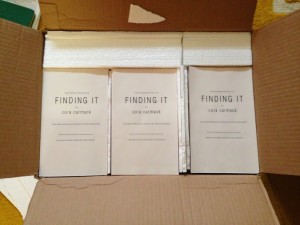 What are those? You might ask. Well, that’s the first box of what was 10,000 sheets of paper. More specifically, 10,000 copies of the title page of Finding It for me to sign.

To give you some perspective, this stack is probably around 500-600. And on average, I could sign about 100 every 45 min to an hour (depending on how interesting the TV show was that I had on in the background). 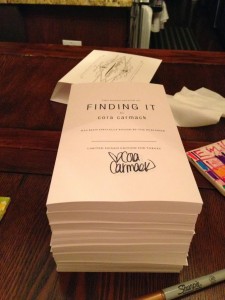 And I signed them all. Every single one of them. My hand hurt. My back hurt. My neck hurt.
And a few of them, I signed with a little something special. Out of those 10,000 copies there are a handful that are completely unique (even to each other). They each have a different little inscription, and most are in a different color. Here’s one of those super special ones: 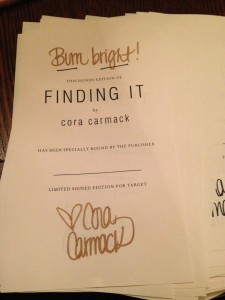 Now where are those 10,000 signed sheets of paper going? I’m glad you asked… 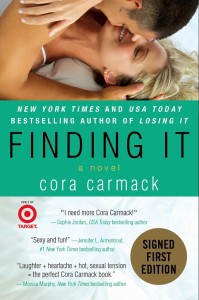 A signed Special Edition for Target. That’s where. Not only will you be able to walk into Target and buy a signed copy of my book (while supplies last), BUT… the special edition also contains an exclusive deleted scene involving swimsuits, a game of chicken, and haikus. 🙂
AND… if you happen to snag one of those extra special copies that has something more than just my signature, send me an email to coracarmack(at)gmail(dot)com with a picture, and I’ll mail you some signed swag, too! AND… because really these copies are SUPER special, I’ll even do one better. If you find one of the special copies and email me, I’ll put your name in a future book.

Not too shabby, right? Just keep in mind, 10,000 copies sounds like a lot, but when they’re divided up and sent to all the Targets across the country, they won’t last long. So you’ll definitely want to go nab yours ASAP after the release date (October 15th).
Well… that’s the last of my major Finding It news. I’m so happy to finally share this news with you guys. Sitting on it has been KILLING ME. And please, if you see Finding It out in the wild during release week, snap a picture and tweet or facebook it to me! I’ll love you foreverrrrrr!
And before I go for the night… I just have to say THANK YOU. THANK YOU X A THOUSAND. It is so unbelievably crazy that this is even happening. I don’t even have the words to express how much this means to me. And none of it would have happened without you guys. Heck, five years ago, I was working at Target to make ends meet while I went to school. It’s hard to fathom how much has changed since then. Many of you took a chance on LOSING IT just under a year ago. I was a nobody with no following, and you guys championed me in a way that I’ll never ever be able to thank you enough for.

You’ll never even know all the ways in which you changed my life just by buying that book or by telling a friend or posting about it online. And everyone who has bought one of my books since… Target certainly wouldn’t give a flip who I was if it weren’t for you all. All I can say is… YOU. ARE. POWERFUL. The market is changing, and you as the reader have more influence than you ever have. So please know that each time you buy a book or push it on a friend or post on your blog, you’re changing someone’s life just like you did mine. And we are so grateful for it.