The One with the Celebration

So, like I mentioned yesterday, I’ve officially been doing this whole “author” thing for a year now. And I love that the third and final full-length book in the Losing It series s releasing almost simultaneously with this anniversary.

It feels like I’ve come full circle. This series is ending, and a new one is beginning.

So, I figured we should celebrate!

And when my publicist and I sat down to talk about what we wanted to do to commemorate the occasion, the theme seemed obvious.
FIRSTS.
This is, after all, the end of the first year containing my first series, which opened with a book about first times, followed by a book about two people confronting their demons for the first time, and ending with Kelsey’s first time out on her own.

So here’s what you need to know:
What you can win: A signed set of LOSING IT, FAKING IT, and FINDING IT. And I’ll let you choose whether you prefer the US or the UK set, that way you can get the ones that aren’t readily available wherever you live. 🙂 AND…. the winner will also receive something very special, of which there are only two. I have one, and you will get the other. That would be… Hamlet the demon cat. 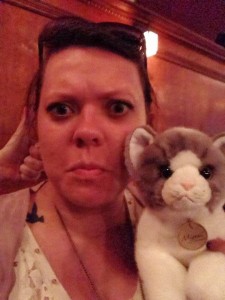 Stuffed, of course. (Doesn’t he look so stinking angry? Adorable). Starting with my last signing in Seattle, I adopted a stuffed version of Hamlet, complete with an “Awkward people need love, too” bracelet for a collar. I bought one for me to take to signings, and another to giveaway. Here’s your chance to have a Hamlet of your very own (including his bracelet collar). And if I can figure out a way to sign him, I will. 🙂
How to win: Earn one entry for the usual stuff– Tweeting, Liking, Following. Earn TEN entries by telling us about one of your awkward or funny FIRSTS in the comments. You can tell up to four stories (each in a separate comment) for a total of 40 entries.
I realize not everyone is ready and willing to bust out stories of their awkward first times (nor does everyone have an awkward first time… lucky bastards). So, that’s why all kinds of firsts are on the table. You can tell us about a first kiss, first date, first time meeting the parents, first time making a colossal fool out of yourself in any romantic capacity. Really, we’re flexible. We just want to celebrate with some laughs.
So, to give you an example, I’ll spill one of my firsts!
FIRST SERIOUS RELATIONSHIP
I’d been in a few relationships before, but this is the first one I really counted. The others had either been too short or not that serious. This guy was different though. He was older, and it went beyond the usual puppy love of my middle school days. (He was actually my first french kiss, too, which occurred in my bedroom with a friend of ours playing video games a few feet away. My head was in his lap, and he leaned over me and gave me a spiderman-esque upside down kiss, which was not nearly as seamless as it appears in the movie. My nose was shoved up against his chin, and I remember thinking only I would manage to have my first kiss upside-down).
Anyway, long story short: About three weeks into this new and different relationship, he showed up to school with a stuffed animal and chocolates. I asked him what it was for, and he said our one month anniversary. Now, I knew positively that it was not our one month anniversary. In fact, he was a full ten days off. I was head-over-heels, and had been counting the days. But the guy was just so cute and sweet that I agreed and didn’t say anything. He looked all hurt because he thought I had forgotten (when really, he was just bad at math).
We proceeded to celebrate the wrong anniversary for the entirety of our relationship. And to make it worse, he was one of those overly sweet guys that wanted to celebrate our anniversary every. single. month. And each time, it killed me. I was a bit of a commitment-phobe even at that age, so combine that with my know-it-all-hermione-granger-wannabe personality, and it was practically torture. To this day, I’m so weird about anniversaries.
I can’t remember if I actually ever told him either. Wherever he is, let’s all hope he’s not working any job that requires he be good with numbers. 🙂

Well, there you go! So tell us about your firsts! Give me your awkward, weird, and humiliating stories, and I shall give you my unfettered adoration (just don’t expect me to celebrate anniversaries).

WARNING: This giveway is only lasts until release day! So, make sure you enter now!