The One with the First Two Chapters of INSPIRE!!!

YOU GUYSSSSSS. THIS IS REAL LIFE. 2 WEEKS UNTIL INSPIRE AND I’M FREAKING OUT.

*breathes into a paper bag* If you’re wondering what all the fuss is about, it’s because I have a new series starting in TWO WEEKS!! 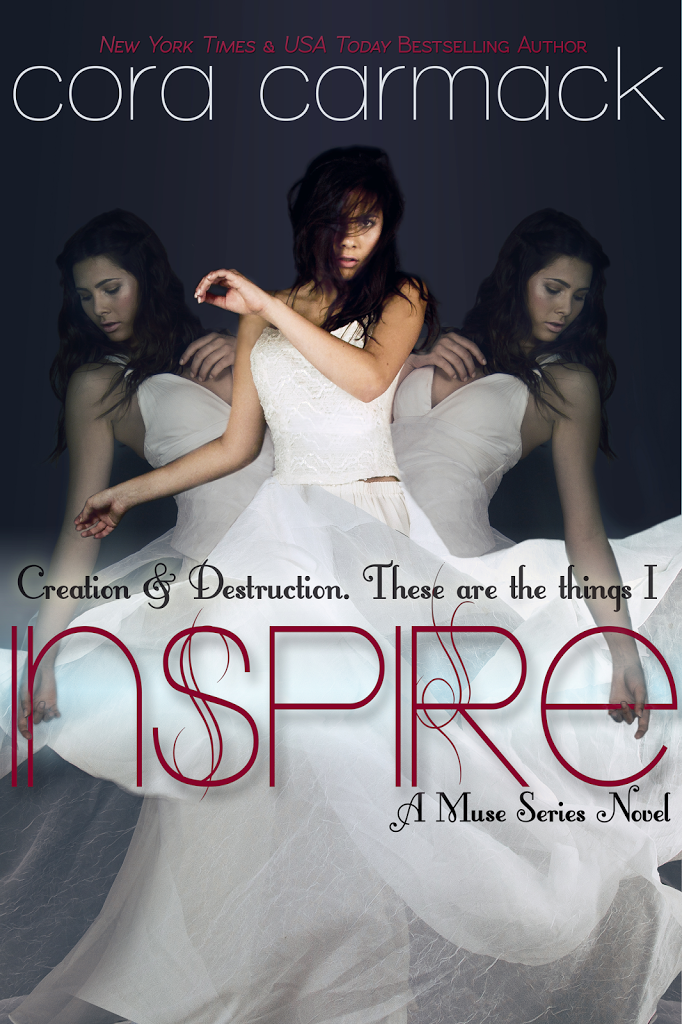 EEEEEEP!! Now, you guys have been asking me a lot of questions about Inspire, so I thought this would be a good time to address some of them.

How can I make sure I don’t miss out on Inspire?
You can add it on Goodreads, and you can pre-order now exclusively through iBooks!

But what if I have a Kindle/Nook/e-reader that doesn’t support iBooks? Can I still pre-order?
Inspire will be available across all e-book retailers on release day! So if you search “inspire cora carmack” on Amazon or BN.com right now, nothing will show up – but don’t worry! It will be there on December 15!

Will there ever be a paperback version? I like being able to smell the pages while I read.
Much like my first book, Losing It, Inspire will start out as e-book only. But I’m hoping to have a paperback available sometime in first few months of 2015.  (And trust me, I love new book smell just as much as the next girl!)

Can I get Inspire in [insert country here]?
Dec 15th is the worldwide publishing date for the e-book in English.  Currently, there are no foreign language releases to announce.

What made you choose to write NA Paranormal?
For ages, I’ve been talking about wanting more New Adult paranormal and fantasy books. And like a good little author, I continued working on my contracted books, waiting patiently for that big breakout paranormal book that would get the tide rolling and start the paranormal boom that I so desperately wanted.

I’ve been lucky the past few years to be able to chase my dreams, and this is the next big dream for me. Most of the books that have shaped me as a person are fantasy. Most of the authors I idolize write fantasy. It’s those kinds of stories that first kindled my love for writing, and I’m so eager to finally be able to share this side of myself with you all.

But is there still kissing??
Oh yes, my friends. Don’t fret. There is PLENTY of kissing and sexy-time. And, because it’s me, plenty of awkwardly hilarious situations as well. 😉


So what made you decide to return to self-publishing?
I’m choosing to go indie because it feels like the best choice for this particular book. I’ve been eager to branch out into speculative fiction for a while now, but the problem was always figuring out the when. There’s been this strange dichotomy where some readers are ready and willing for NA to branch out into other subgenres, whereas other readers are still predominantly interested in the contemporary romance that began the NA boom. This makes NA fantasy still a pretty big risk for publishers (especially considering shelf space for NA in bookstores is still fluid and unpredictable). So for Inspire, it was the perfect choice to go indie. It’s risky to jump into a new subgenre, but also SUPER exciting!!

How many books will be in the series?
As of now, I’m planning on this being a two-book series…but as some of you may know, my characters tend to have minds of their own, so there’s a chance there could be more. 😉

I want to help spread the word! What can I do?
Tell your friends! Tweet about Inspire, post on Facebook, tell random people on the street – every single bit of buzz helps! You can also join Cora’s Crew, which is a Facebook group for all things Inspire-related.


Do you have a time machine to make December 15 get here sooner?
I wish!!

But while I don’t have a TARDIS or the ability to make time move faster, I DO have…..THE FIRST TWO CHAPTERS OF INSPIRE!!!

Go to KimberlyFayeReads for Chapter Three!

And then you can read even MORE at these blogs as we approach release day!