ALL BROKE DOWN has been out in the wild for about four days….and for those four days, all I’ve wanted to do is tacklehug each and every one of you.

All Broke Down is book #2 in the Rusk University series, and you can order it on Amazon , Barnes & Noble , or iBooks! Or find it in your local bookstore! You can also add it on Goodreads! You’ve already met Silas Moore and Dylan Brenner, and now that the book is out, I thought we could just reminisce about the people we’ve met so far. 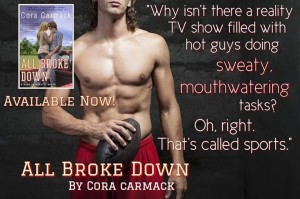 I’ve loved writing all of my books, but in the Losing It series, everyone graduated and went their separate ways. Though they still made small appearances in each other’s books, they mostly led their own lives. The Rusk series in entirely different. The secondary characters are a huge part of these books.  Each story relates in some way to the football team and the community that surrounds it. So not only do you get to know the characters BEFORE their books, you also get to see them frequently after their stories have been told.
First there was Dallas and Carson, who you got to know in All Lined Up. Dallas in honest and spunky, and spent her life in the shadow of football thanks to her father, Coach Cole. As a couple, they fit together so well and are good friends (not just boyfriend and girlfriend). I sort of see them as the nucleus of the group. They keep everyone else grounded (and in control… mostly).
That’s Carson’s job on the team too as quarterback. He’s the leader, and he sort of brings everyone together. And it’s a big job. He’s got Silas, who is supposed to be a leader too, but has a knack for causing as much trouble as he diffuses. Then there’s Torres (who might possibly be my favorite character ever). He’s wild and funny and completely shameless. It’s a different sort of confidence than the typical romantic hero has. Because he’s willing (and quite able) to make a fool of himself on a regular basis. And there’s a strange sort of charm in that. Luckily, Carson has some help keeping those two in line. His friend Ryan is a manager on the team, and though he can be a tad silly like Torres, he’s usually pretty good for some straight talk. Brookes rounds out the football guys. He’s quieter, his personality isn’t as out there as those of his friends. But he’s thoughtful, and he has a knack for reading people (I also love him). I JUST LOVE THEM ALL, OKAY?
And then there’s the coaches too! I’ve already mentioned Coach Cole, but I think he deserves another mention. He’s this great mix of gruff hard-ass and loving supporter. He’s not so good with the emotions. He’s better at yelling and ordering people around, but that makes it all the more meaningful when he does show emotion. In writing All Broke Down, I also found myself falling in love with another Coach on the Staff– Coach Oscar (or Oz). He’s the strength and conditioning Coach, and he’s the youngest guy on staff. As such, he feels the need to be particularly tough so the guys take him seriously. You can probably expect to see more of him as the series carries on.

Then there are the non-football people in this cast of characters. And I love them just as much as I do my athletes and coaches. First, there’s Stella. She was Dallas’s best friend in All Lined Up, and she quickly won over my heart. She’s just got that extra something about her. She gets along with everyone. She always knows what to say. She’s pretty much the coolest chick ever.

Dylan and Nell and Matt are three brand new additions in All Broke Down. Dylan is a student activist, and she finds herself drawn to Silas (who is her total opposite). Nell (or Antonella) is her roommate. We just get brief glimpses of her in All Broke Down, but she’s the incredibly serious and studious type. Matt… ah, he’s another favorite. He’s this vibrant guy that knows Dylan through her activism work. As Dylan describes him, he’s basically a “Disney prince. If Disney made bearded, bisexual princes.” He’s hilarious and spontaneous, and has some of my favorite moments in All Broke Down.

So that’s my cast of characters. But I know what you’re all really wondering is…

Who is going to get their own book?

At this moment in time, I can promise you very few things. I signed a three book deal with my publisher, but hopefully we’ll be continuing on the series for a few more books at least. But a lot of that just depends. Publishing is a business first, and the better the current books sell, the more likely the publisher is to be excited to continue the Rusk series. So if you love the books, recommend them to your friends!

Here are a few things I can tell you:

(P.S. If you’re bummed that you have to wait until May for the next Rusk University book, make sure you check out the brand new series I have starting with INSPIRE on Dec 15th! That’s MUCH sooner! 🙂 You can read all about it here).

So there you have it! Those are all the major players in the Rusk University series, and everything I can tell you about the future of these books. I hope you’re all enjoying catching the #SilasVirus, and thank you so much for all your kind tweets and messages! The response to this book so far has been so overwhelming and so heart-warming, and I can never thank you enough. <3

BUT I SHALL TRY WITH THIS FINAL EPIC GIVEAWAY!!!
Win a signed set of the entire Losing It series (including the novellas) and All Lined up!
Open internationally. 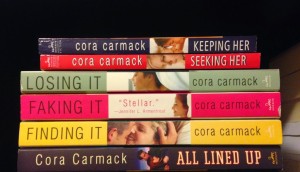