The One with Everything You Need to Know About Finding It and The Secret to Life and Free Things!

Aahhhhhhh friends! We are a mere TWO WEEKS away from the release of FINDING IT.

Can you believe it???

And kind of alarmed because this is the end (kind of). Finding It is the last full length novel in the Losing It series. We’ll still have Seeking Her in January, but that’s a novella. And in case you missed in yesterday, I’ve got a new series slated to start next year about Texas and Football and Swoony romance.
But there’s something crazy about this being… the end. 🙂 Especially because Finding It is releasing almost one year to the day from day I self-published Losing It. I’ve got a big post planned for that anniversary, so I’ll save the weepiness until then, but yeah…

So, anyway, there’s lots of fun FINDING IT things happening, and I want to make sure you know them all.
FIRST: I’m giving away things!!! I just got in a box of these bad boys, and I’m ready to do some damage! 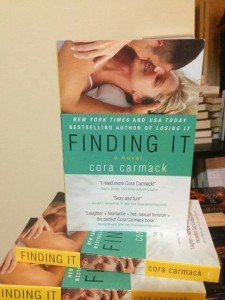 So, here’s how you win. For the next two days (Tuesday and Wednesday), you can Tweet, Facebook, Instagram, Tumble, and/or vine why you want to read FINDING IT. You can do it more than once and on as many of the above platforms as you want! (But be reasonable… you don’t want to lose your followers by tweeting seven bajillion times). Make sure you tag me in your post  and hashtag #FindingIt so you’ll be eligible to win. I’m on Twitter, Facebook, Instagram, and Vine. I don’t have a tumblr, but if that’s your preferred posting place, just tweet or facebook me a link to your Tumblr post (or leave it in the comments below).
Thursday morning, I’ll pick at least two winners to win signed copies of the US paperback edition of Finding It. You’ll be the first fans to hold a copy in your hands! So that’s it. Post. Tag me. Tell me why you want to win!
SECOND: Whether you win or not, you can read a pretty massive excerpt of FINDING IT on my facebook page. The first six chapters, which comes out to a whopping 66 pages, can be read here! AND… we’re even going to increase that by another chapter every Tuesday until release day!
THIRD: If you pre-order the book, you can enter your information and proof here, and you’ll get an exclusive sneek peek at SEEKING HER, the companion novella to Finding It that releases in January! All you need is either an order number or a picture of a receipt or order history.
FOURTH: No more official stuff. I just wanted to take a moment to say how excited I am to be sharing this story with the world. Kelsey… that girl gave me a lot of problems. She’s abrasive and wild and unpredictable. But hers is a story that I absolutely wanted to tell. As a writer, the very first thing I figure out about a character is what he or she wants. I figure out what they desire most, and then I let that dictate their actions. When I sat down to figure out what Kelsey wanted, I found that she didn’t know any better than I did. She wanted to know. Desperately. All her other friends knew what they were doing and what they wanted to do with their life, and she was just floating. So I set out to write a book about a girl who wanted to want something. The only question was what? The ever-ambiguous “It” in the title. Kelsey isn’t the easiest character to love, but I think she’s real. I know her. Have been her on occasion. And I hope she’ll help at least a few people out there realize that it’s okay not to have everything figured out. That’s natural. That’s normal. But you also can’t let your life be stagnant because of it.
Okay. That’s all my rambling on Finding It:
A few other important tidbits!
1. The Keeping Her mass market paperback released today!! You can get it for just $3.99!
2. I’ve got lots of Events coming up! Including Austin, Houston, Miami, and Richmond! Make sure to check out the Events tab here on my blog for more info!
3. I love you.
Okay. Now it’s really the end.