The One with Super Cool Visitors 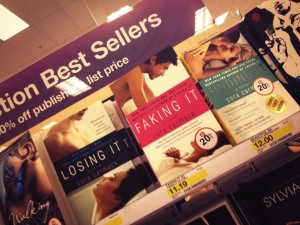 Finding It had a FANTASTIC release day on Tuesday. I cannot even begin to describe how overwhelmingly wonderful it was to see all the pictures from people picking up their copies. In particular, the search for the Super Special (or as Twitter fondly called it “Golden Ticket”) Target copies was one of the coolest things  the coolest thing EVER! If you don’t know what I’m talking about, read this.
And I think I’m still kind of in shock about seeing all three books together. It’s a crazy, amazing thing, and it doesn’t feel real. And so many people have messaged me to tell me how much they loved the book. An overwhelming number have called it their favorite of the series, and every time it loosens one of those scary-release-day-knots in my stomach.
If you haven’t picked up your copy of Finding It yet, I hope you’ll check out the Signed Special Edition at Target. Not only does it have my signature, but also a deleted scene. And more than that, Target has been really fantastic about supporting New Adult authors and the category as a whole. And I think we all hope that will continue! If you’ve got your copy, I can’t wait to hear what you think of Kelsey’s story! And Jackson, too, of course! Especially since he’s getting his own novella (Seeking Her) in January! It’s a sort-of-prequel. And by that I mean, it picks up a few weeks before the opening scene of Finding It with all new material, and then the last half of the novella overlaps with the beginning of Finding It, meaning you’ll get those early scenes from his POV.
But enough about me…
As fantastic as this release week has been so far, I’m actually popping in to tell you about another new release! One of the best things about being an author is getting to meet other authors (most of which I TOTALLY fangirl over). Two such amazing authors that I’ve had the pleasure of meeting are Steph Campbell and Liz Reinhardt. And when we discovered that we were sharing a release day, we decided to do something special!
They’ve just released the newest novella in their Lengths series, Riptides. If you haven’t read this series, you need to jump on it ASAP! Though this one can be read as a stand alone, FYI. It’s all about Enzo, a super hot surfer dude. And MAN… can I just say that I TOTALLY have the hots for Enzo! Here’s a little more about his story:
Enzo Rodriguez doesn’t take much seriously–unless it involves waves, boards, or good beer.

When too-hot-to-handle Jessica Mills strolls into his life, Enzo is willing to forego all of those things for every second he can spend with her.

But Jessica has a huge secret–and when it’s revealed, it not only crushes Enzo, but has the last person he wants to ask a favor of–his brother-in-law Adam–bailing him out of jail.

Enzo is convinced that the only way to mend his bruised ego and heart, is to pack his bags and leave the turbulent waters of Silver Strand…for good.

Ahhh…. I seriously love those girls! They write such strong characters. Their books are fun and smart (my favorite kind). I hope you’ll check them out! And drool over Enzo with me! 🙂