The One with the All Played Out Street Team!!!

It’s that time again…time to announce the newest batch of Carmcats!!

I know I say this every time we do the street team application thing, but you guys…..this was SUCH A HARD DECISION.  We had so many amazing applications, and as I was looking through them all, trying to narrow them down, I was basically like this the whole time:

Once again, I was absolutely floored by the amount of diversity and talent within the applications. With each new application I read, I grew more and more distraught because I KNEW I would have to make some cuts but I didn’t know how. And it doesn’t help that I’m the most indecisive person EVER. It soon became glaringly obvious that I needed to call for back up.

With help from some of my publishing peeps, we narrowed it down as much as we could. But even then…. it wasn’t enough. In fact… I eventually ended up expanding the number of people we planned for the team because it was just too hard. And even then… I still had to say goodbye to some applications (and people that I love). People whose names I recognize from regular chats on twitter or Facebook. People that I ADORE. And I’ll never be able to tell you all how hard that was. But please know that if you didn’t make the team… I likely agonized over it. For days probably. Every time I would strike a name off my list… I would inevitably add it back in twenty minutes later. We especially had a lot of AMAZING international applications this time around. But for logistic and financial reasons, I’m limited in the number of international people I can choose. But in the end, I think we put together a team that I’m really proud of and excited for.

And I hope that you all will consider reapplying whenever it’s time for Stella’s Book!

If you made the team, OMGCONGRATULATIONSILOVEYOUTHANKYOU!!! I’m out of town this weekend for Apollycon, so you likely won’t hear from me for a couple days. But as I mentioned in the application post, we’re doing something different this time around, and we’ve assigned all new members a mentor! A big to your little, if you will. So while it might take me a few days to get organized and reach out to you all, you might hear from your big or see them lurking around figuring out more about you.

And again, if you didn’t make the team this time around, PLEASE know that I love and adore you, and it KILLS me that we had to let some of you go. If I’d had my way, we’d just have one gigantic team of AWESOMENESS. <3

To say thank you for applying….how about a little #AllPlayedOut teaser? 🙂

“I need you to add something else to your list.”

I raise my eyebrows and ask, “What?”

What was this about? Surely this isn’t about the Sweet Six thing again, not after how poorly things went in the stacks.

“I want you to add ‘Have the best orgasm of your life.’”

I drop his pen. I very nearly drop my spiral.

He’s back to the dominant Mateo that comes out when he’s kissing me, and the ache he’d started back in the library flares to life between one breath and the next. I reach for the pen, but I’m too distracted by what this could mean.

So we’re not over? He still wants me? How could he still want me? My heartbeat speeds up as I mentally dissect our evening up until this point, and when it takes me too long to find the pen, he growls, “Oh, fuck it. Add it to the damn list later.”

He grabs the spiral and tosses it into the passenger seat. I sit up, and he pulls at the stretchy fabric on the thigh of my yoga pants, letting it snap back against my skin. 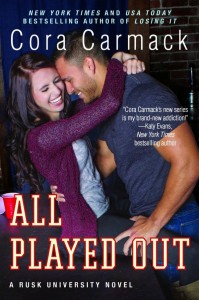 And once again, we think it’s time to add some new readers to the mix!

A street team is the ultimate set of super readers. I’m looking for people who’ve read all my books, and love my characters, and are eager for my next fictional journey! A street team helps spread the word about an author’s books– online, in person, and IN SPACE.
The Rusk University Street Team (aka “The Carmcats”) was absolutely invaluable to me during the lead up and release week of All Lined Up and All Broke Down. Like… they redefined invaluable. Seriously.

The former teams have done everything from making graphics, designing the Rusk logo, hosting giveaways, brainstorming marketing ideas, and spreading the word about my books like a plague (a plague of AWESOMENESS). They went above and beyond to host the release day Facebook parties, and basically kept me from losing my mind during a (very exciting, but still very) stressful time.  And they are some of the funniest, kindest, most generous, most encouraging people I have ever met – I want to carry each and everyone one of them with me everywhere I go. Seriously… I cannot sing their praises enough. Because beyond all the awesome things they did for the book, the team means a great deal to me personally. By keeping the team small and requiring people to apply instead of just join a Facebook group, we’ve been able to foster a sense of family within the group. We talk about much more than my books. We talk about other books we love. We talk about our lives– the good and the bad. We talk about the delirious and weird things that come up when we’re all staying up way too late.

And that’s the most important thing I want to maintain as we say goodbye to some old members of the team and add new members. I want to make sure the new members feel welcome, and that this is the absolutely coolest street team around. So with that in mind, we’ve decided to do something different this time. Half of the All Played Out team will consist of former members of the team. And each of them will have a new Carmcat that they mentor. Sort of the Big/Little scenarios you see with sororities and other groups. We think this will help the group become even closer, faster, and really make for the best team yet!
Interested? Here’s some more details:

It’s a big time commitment to be part of this street team (not just because you’ll be helping me, but also because our exclusive street team Facebook group is an incredibly fun place to hang out and ignore the rest of the world). APO releases May 12th. So don’t apply unless you think you’ll have the free time to help support the release.

As a street team member, there’s lots of things you can do to help my books succeed. You don’t have to do them all…at least not at the same time. And this is far from an all-inclusive list, but rather some suggestions to give you an idea of how we might need you to promote All Played Out.

If you need a little more persuading, check out this video that my street team made for the All Broke Down Street Team recruitment (just pretend it says “All Played Out”, lol.)

And I realize that some of you have applied for the team before, and not made the cut. Believe me when I say that choosing these street teams are the HARDEST thing I have to do as an author. I always reach a point where I can’t narrow it down anymore because I love everyone, and I have to bring in other people from my publicity team to help make the final few decisions. And those decisions are often very strategic. We’ve turned away some AMAZING applications because we were just looking for something different. We don’t always just look for the biggest following. We try to diversify the team as much as possible. Some Carmcats are more heavily involved on Facebook, some on Tumblr, some on Twitter, some on Pinterest. Some of you have been so close to making the cut… both times! But for one reason or another, it didn’t work out. I hope that you will consider re-applying again this time. I can’t promise that you’ll make the team, but I can say that I’ll be paying special attention to those who have applied in the past, and are still eager to join the team. I’m so grateful for everyone who cares enough to fill out the application and put themselves out there.

***APPLICATIONS ARE NOW CLOSED***
It will take us some time to go through them all, but we’ll announce the team as quickly as possible.
Thank you all so much for your continued support and love! I adore you!