The One Where You Can Apply for the ROAR Street Team!

I spent years and years in the YA community as a reader and a blogger. The first book I ever finished was YA fantasy. The next few books I started were all YA too. In fact, the first time I ever wrote anything that didn’t involve fantasy elements, it was a little book now called Losing It that totally flipped my world upside down. I’ve had a wonderful few years writing quirky  New Adult romance (and I’m still going to be doing plenty of that, no worries), but the itch to write fantasy again has been plaguing me for years now. And on June 13th, my dream of writing a YA high fantasy will come true with the release of ROAR, the first book in the Stealing Storms series. For my romance readers unsure about YA and fantasy– give it a shot. There’s a hot (and possibly evil) prince, a bad ass storm hunter who looks great in leather, a princess in disguise, and a really fun and ferocious cast of characters. Plus lots of angsty sexual tension and kissing and swoony stuff. You know I wouldn’t leave that out. 🙂
Here’s a little more about the book: 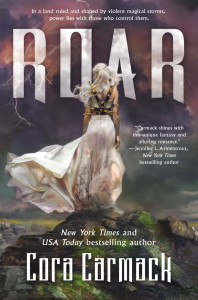 In a land ruled and shaped by violent magical storms, power lies with those who control them.

Aurora Pavan comes from one of the oldest Stormling families in existence. Long ago, the ungifted pledged fealty and service to her family in exchange for safe haven, and a kingdom was carved out from the wildlands and sustained by magic capable of repelling the world’s deadliest foes. As the sole heir of Pavan, Aurora’s been groomed to be the perfect queen. She’s intelligent and brave and honorable. But she’s yet to show any trace of the magic she’ll need to protect her people.

To keep her secret and save her crown, Aurora’s mother arranges for her to marry a dark and brooding Stormling prince from another kingdom. At first, the prince seems like the perfect solution to all her problems. He’ll guarantee her spot as the next queen and be the champion her people need to remain safe. But the more secrets Aurora uncovers about him, the more a future with him frightens her. When she dons a disguise and sneaks out of the palace one night to spy on him, she stumbles upon a black market dealing in the very thing she lacks—storm magic. And the people selling it? They’re not Stormlings. They’re storm hunters.

Legend says that her ancestors first gained their magic by facing a storm and stealing part of its essence. And when a handsome young storm hunter reveals he was born without magic, but possesses it now, Aurora realizes there’s a third option for her future besides ruin or marriage.

She might not have magic now, but she can steal it if she’s brave enough.

Challenge a tempest. Survive it. And you become its master.

This book would not have happened without the support of so many people – my editor, my agent, my publicist, my assistant – but most importantly, this book would not have happened without YOU. You guys are the driving force, the source of encouragement when things get tough, and a fount of such contagious energy and excitement. For the past five years, y’all have been helping me follow my dream, and I hope you’ll want to live out another dream with me as I venture into new territory. If you do…

CALLING ALL READERS, BLOGGERS, AND JUST GENERALLY AWESOME PEOPLE!
I want YOU on the Roar Street Team! Yes, you!

Okay, but what’s a street team? I’m so glad you asked!
A street team is the ultimate set of super readers. I’m looking for people who love my books and my characters, and are excited and eager for my next fictional journey! A street team helps spread the word about an author’s books– online, in person, and IN SPACE (when possible). The Rusk University Street Team (aka “The Carmcats”) was absolutely invaluable to me during the lead up and release weeks of All Lined Up, All Broke Down, and All Played Out. Like, if the most valuable player gets the MVP award, my street team would get the MVT award. (Can we make that a thing?)
The former teams have done everything from making graphics, hosting giveaways, brainstorming marketing ideas, and spreading the word about my books like a plague (a plague of AWESOMENESS). They went above and beyond to host release day Facebook parties, and basically kept me from losing my mind during a (very exciting, but still very) stressful time. And…they’re just awesome people. Funny, kind, intelligent, generous people that I am so blessed to have in my life. Seriously… I cannot sing their praises enough. And as I venture into YA for the first time, I’m going to need people like that even more than before. If you’re especially stoked about the idea of me writing fantasy romance, that’s even better!
It’s a big time commitment to be part of this street team (not just because you’ll be helping me, but also because our exclusive street team Facebook group is an incredibly fun place to hang out and ignore the rest of the world). Within the street team, you’ll be divided up in small groups where you’ll work together to earn cool prizes and extras. So if you’re applying, please be certain you have the time to devote to the team and your group.

As a street team member, there’s lots of things you can do to help my books succeed. You don’t have to do them all…at least not at the same time. And this is far from an all-inclusive list, but rather some suggestions to give you an idea of how we might need you to promote Roar.

You must fill out the application below by Friday, February 10th at 11:59pm (CST) to be considered. By requiring people to apply rather than just join a Facebook group, we get to know people better. We’ve been able to foster a sense of family within the group. We talk about much more than my books. We talk about other books we love. We talk about our lives– the good and the bad. We talk about the delirious and weird things that come up when we’re all staying up way too late. This time around we’ll be picking a bigger team than usual because we really want to go all out with Roar. I know that some of you have applied for my Rusk teams, maybe multiple times, and not made the cut. Believe me when I say that choosing these street teams are the HARDEST thing I have to do as an author. I always reach a point where I can’t narrow it down anymore because I love everyone, and I have to bring in other people from my publicity team to help make the final few decisions. And those decisions are often very strategic – we try to diversify the team as much as possible and make sure we’re choosing people with a variety of strengths and assets and interests. What that means is you don’t necessarily have to have the biggest blog or the most popular Instagram. We’re concerned with your enthusiasm and willingness to participate, not just your follower count. Your statistics are not the end all and be all here. So please don’t let the stress of filling out an application get to you. Just be yourself and tell us what you love.

That being said, depending on the number of applications, there may be some that don’t make the team. But please know that I appreciate each and every one of you, and am so grateful to everyone who cares enough to fill out the application and put themselves out there. You are incredible.

So how do you apply?Fill out the form below (or click HERE) by Friday, February 10th at 11:59pm (CST). Just tell us anything you think might be relevant. We don’t mind if you ramble. 😉

As a thank you for reading all this and considering applying, here’s a quick teaser featuring that aforementioned badass storm hunter….Locke sighed. It was well past time to start training her for real. Clearly, she would not be scared off by a little hard work as he had hoped.

He stowed the maps back in the Rock, and then set off toward Roar’s shoddily constructed tent. The thing stood haphazardly, leaning with the wind, but true to her stubbornness, she had refused to let anyone help her set it up.

He lifted the tent flap carefully, and called into the dark space, “Rise and shine, princess.”

Locke heard the shuffling of blankets, and a grumbled, “I will murder you.”

He fought a smile and crooned, “Come on, princess. Don’t make me drag you out of there. I guarantee I’ll enjoy it entirely too much.”

He narrowly dodged a waterskin she tossed through the open flap of her tent, but he heard her moving around. She was always a little grumpy in the mornings, and it entertained him to no end.

“You know storms wait for no one. They come when you’re sleeping or sore or tired, and those not strong enough to outrun them are those that don’t survive.”

He dropped the tent flap and walked several paces away to wait. When she climbed out of the tent, he lost his train of thought completely. Her hair was mussed and wild, and her mouth open in a yawn. She wore a large linen tunic that swallowed her slim form, hanging down to mid-thigh. Beneath it her legs were bare, the light of the moon cast- ing them in a soft glow. The sight burned into his brain, never to be forgotten.