The One with the FAKING IT Giveaway

How much do I adore you all? SO MUCH.

We’re SO CLOSE to the release of FAKING IT (*cough* Sixteen days! *cough*).

There’s been a great deal of excitement in the last week or two. For one, we’re holding a FAKING IT pre-order campaign, and more pre-orders means Bonus Scenes from LOSING IT in Garrick’s POV. We’ve already got the first one all about when he meets Bliss for the first time, and we’re getting SUPER close to the next threshold and the next bonus scene. So what are you waiting for? Go Pre-order! Go make your friends pre-order! And go here to read the first bonus scene or learn more about the campaign.

And as if that weren’t enough Garrick related excitement… Did you see the announcement about KEEPING HER? It’s a novella from Garrick’s POV that is a sequel to LOSING IT! It’s got lots of kissing, more British men, and a trip to London! It releases August 13th, and is available for pre-order now!

But now to what you’re really here for… FAKING IT! I promised an ARC giveaway when we hit 5,000 likes on Facebook, and we did it! So, it’s time for some FAKING IT love.

But first… did I mention that you can read the first two chapters of FAKING IT here. EDIT: Whoops. had to wrong link for this at first. Has been fixed! <3

And you can read Cade and Max’s first kiss here.

And in case you don’t know what FAKING IT is all about: 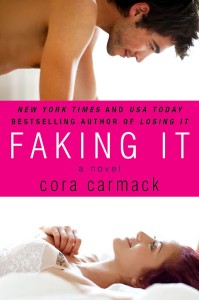 Mackenzie “Max” Miller has a problem. Her parents have arrived in town for a surprise visit, and if they see her dyed hair, tattoos, and piercings, they just might disown her. Even worse, they’re expecting to meet a nice, wholesome boyfriend, not a guy named Mace who has a neck tattoo and plays in a band. All her lies are about to come crashing down around her, but then she meets Cade.

Cade moved to Philadelphia to act and to leave his problems behind in Texas. So far though, he’s kept the problems and had very little opportunity to take the stage. When Max approaches him in a coffee shop with a crazy request to pretend to be her boyfriend, he agrees to play the part. But when Cade plays the role a little too well, they’re forced to keep the ruse going. And the more they fake the relationship, the more real it begins to feel.


And now that you’ve stuck around this long… here’s your giveaway. It’s only open for a few days so I can get it to the winner ASAP, and they’ll still get to read it prior to the release. So, don’t wait to enter! And be sure to come back and tweet daily for more chance to win!

AND IF YOU LIVE IN THE NYC AREA, I’ll be signing ARCS of FAKING IT at BEA on June 1st at 1PM. You can find more info on the BEA website.